The usage of the in-built smartphone’s SMS text messaging app is constantly declining. According to research, many people are now sending messages via other instant messaging platforms like Viber, Facebook Messenger, and Whatsapp.

The use of such IM apps vary depending with the country or continent. Some of them are used across the world while others are used in one or more countries in a specific continent. What are some of the popular instant messaging apps in Germany? The following are the top five messaging apps that are widely used in Germany.

Whatsapp is currently used by almost all countries in the world as an IM app. This app has got an awesome market share in Europe whereby over ninety percent of smartphone users in Germany use this app for texting and social networking. Whatsapp was among the first cross-platform messaging applications in the world. It doesn’t work on tablets and as well there is no any desktop version for the app.

Viber allow its users to make free calls, share videos and photos, as well as send texts. Users can also create group chat for interaction and social networking. This app perfectly integrates into the Android’s user interface and therefore offering the users with a great user experience. Viber is widely used in Germany and other European countries. There are also client versions for MacOS, iOS, and PCs.

Facebook Messenger allows the users to interact via group messaging or single contact messaging. Other features include photo sharing and ability to integrate to the Facebook’s site. The Facebook Messenger is an ideal app to chat with friends and share photos in the social networking process. This app is widely used in the western counties including Germany.

iMessage is an Apple IM program. It only works with MacOS and iOS. This app offers free group and single contact messaging. The disadvantage of this app is the fact that people without such devices will be left out of it. The Messages app is installed automatically in MacOS and iOS devices. The app is massively use in Germany and other Western and North American countries.

Google Hangouts allows its users to share free group and single contact messaging. Others features include the ability to share photos and make video calls. This app is available in the form of browser extension and also for mobile devices. This app is new and therefore it has got some few bugs. 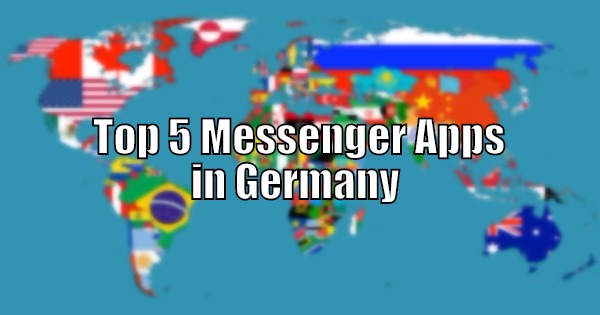