TCL Communication has launched another edition of BlackBerry KEYone series titles as BlackBerry KEYone Black Edition in start of Q3 this year in few regions around the world. And still launching and promotion around as The Company recently unveiled the product for Indian market in IFA 2017.

This creation of TCL Communication is a treat for the fans of BlackBerry around the world. As these fans often asked for adding additional feature, styling and performance options in new model of BlackBerry KEYone.

Global General Manager for TCL, Alain Lejeune said that “The global release of the BlackBerry KEYone from TCL Communication has far exceeded our expectations, with our re-imagined BlackBerry Smartphone now available in more than 30 countries around the world; and more coming later this year,”

The mobile has a chipset: Qualcomm MSM8953 Snapdragon 625 and Octa-core 2.0 GHz Cortex-A53 CPU. It have 4GB RAM and 64GB internal storage, which is expandable up to additional 2TB.

Blackberry KeyOne Black Edition has a 12MP rear camera with camera sensor that captures sharp photos in any light. The mobile consist DTEK embedded by the company, that let you know when privacy is disturbed and also suggest the possible actions for the situation. And this feature offers constant security protection and monitoring of your apps and operating system. The mobile will receive regular Android security updates at monthly basis.

It has Smart Keyboard that allows to set more than 52 shortcuts that’s can be easily customized and transfer every letter key to your favorite apps so that you can access them quickly. It Includes the first keyboard-embedded fingerprint sensor that is located in the spacebar. This sensor is very helpful as it has added device security to the system. QualcommQuick Charge 3.0 charger is also available with the handset which enables 50% charging in just 36 minutes. The battery lasts up to 26 hours with regular usage. Distinct BlackBerry Mobile runs Android having the functionality and familiarity of the Android 7.1 Nougat. This feature gives the user complete access to Google Play Store.

The users will have powerful combination of optimized battery and fast LTE speed for fast file sharing. 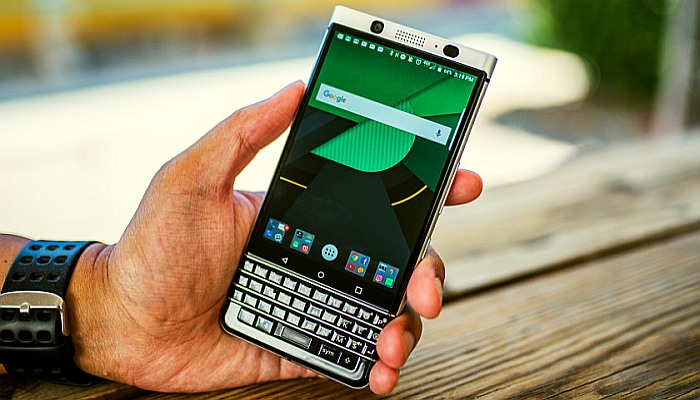