Micromax is going through a tough phase in India. Competition from the likes of Xiaomi, Huawei, Vivo, Gionee, Asus and other manufacturers are killing their sales expectations. Added to that, Samsung’s newly launched J series offers great hardware and decent performance at a cheap price. This move from Samsung has also affected Micromax’s sales in India by a huge margin.

To solidify their position and to fight back against the Chinese invasion, Micromax recently launched 15 new smartphones. They’ve also come up with a redesigned logo, which marks a new phase for the company. Will this help them to get back into the game?

Their recent launch included the Micromax Canvas 6 Pro. The phone has some serious hardware and will hopefully be the game changer for Micromax. The most attractive selling point of the phone is its price. Coming in at a price tag of Rs.13, 999 (around $213), Canvas 6 Pro is the only phone in this category to come with a massive 4 gigabytes of RAM. The phone will be up for sale on the 20th of April and it can be pre ordered by paying a sum of Rs.1, 000 (around $16). Take a look at the specifications of the phone and be amazed at what you get for just over $200.

In terms of design, the phone looks like an older Lumia phone with a polycarbonate body. It has well rounded edges that will make it easier to hold. Under the hood, there is the 2GHz MediaTek Helio X10 octa-core processor. It is a really great processor that delivers optimum performance when it comes to day to day activities, gaming, and browsing. It can handle multiple tasks with ease. Added to that, 4 gigs of RAM also helps the phone in excelling in almost all performance oriented tasks. Storage is a bit on the lower side at 16GB, but can be expanded up to 64 GB.

The camera setup is as seen in all the phones in this range. There is a 13 megapixel rear shooter and a 5 megapixel selfie camera. The rear camera has phase detection autofocus for faster and accurate focusing. Canvas 6 Pro also has other standard features like 4G LTE, Wi-Fi, and Bluetooth. Providing the phone with the required juice is a 3000mAh battery which would be just sufficient for a day’s usage. The phone comes with Android 5.1 Lollipop, along with Micromax’s new platform called Around. It would’ve been a better phone if it had Android 6.0 along with a metallic body and slightly more storage. But nevertheless, it is nothing short of spectacular for the price at which it is being offered. 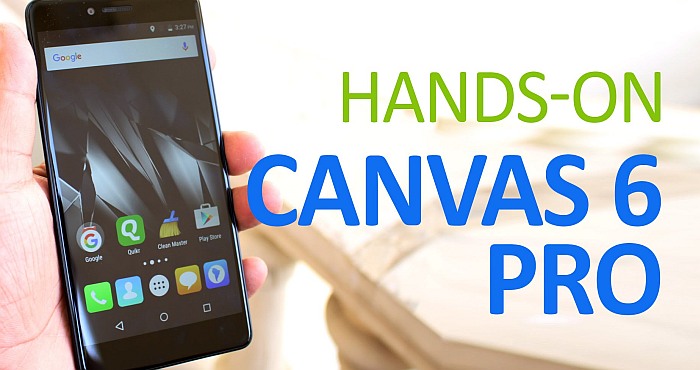